Since late 2012, there has been significant global media and political concern about evidence suggesting that some multinational corporations engage in aggressive tax planning strategies to pay little or no tax anywhere in the world. These strategies are known as base erosion and profit shifting or “BEPS”.

The issue of BEPS formed part of the G20 agenda in 2013, who asked the OECD to report back to it with global strategies to address international concerns. The end result was the adoption of an OECD/G20 15-point Action Plan recommending a combination of domestic reforms, tax treaty changes, and administrative measures that would allow countries to strengthen their laws in a consistent manner and work together in combatting BEPS.

Recognising our own vulnerability to BEPS and the value of working cooperatively, New Zealand actively participated in the OECD/G20 project, which was finalised at the end of 2015. In June 2016, in response to the OECD’s BEPS work, the New Zealand Government released its own BEPS programme to address BEPS issues in New Zealand.

New Zealand’s response to BEPS is generally aligned with Australia’s. It is also broadly consistent with the OECD/G20 Action Plan, although the specific proposals are tailored for the New Zealand environment. In some instances, New Zealand’s existing tax laws are already consistent with OECD recommendations. In other cases, however, tax treaty and domestic law changes are required to address BEPS.

The measures proposed in this Bill will prevent multinationals from using:

These proposed measures were the subject of public consultation beginning in September 2016 with proposals to address hybrid mismatch arrangements.

The Bill makes amendments to the Income Tax Act 2007 and the Tax Administration Act 1994.

Each provision of the Bill comes into force on the date specified in the Bill for that provision. For most provisions this is income years beginning on or after 1 July 2018. 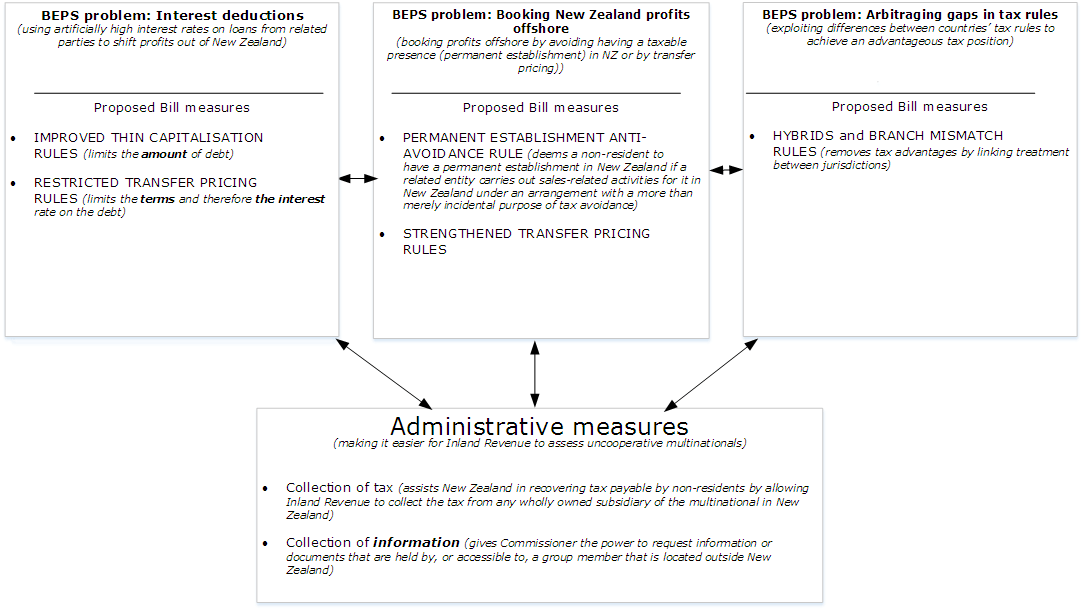 Click on the image for a full size version | Source: SVG version