3.1 Addressing hybrid mismatches is a key part of the G20/OECD Action Plan (Action Plan) to address base erosion and profit shifting (BEPS). The nature of BEPS means that countries must take a global perspective in tackling BEPS issues, and attempt to reach consensus on a co-ordinated response. In terms of hybrid mismatch arrangements, the double non-taxation result can only arise because of the lack of consistency in the tax treatment of an entity or instrument among countries.

3.2 In considering how best to respond to the problem of hybrid mismatch arrangements, the Government is aware that a non-OECD approach could be taken. For instance, some countries are of the view that not implementing the OECD recommendations is in their best interests. Another option is for New Zealand to introduce specific rules targeting the hybrid mismatch arrangements that are known to affect New Zealand.

3.3 This chapter discusses the merits for New Zealand of:

3.4 The ability of multinational enterprises with access to sophisticated tax advice to take advantage of hybrid mismatch opportunities may provide an unintended competitive advantage over businesses that cannot.[23] The OECD has found some evidence that multinational enterprises with tax planning opportunities tend to have greater market dominance and higher price mark-ups compared with other firms.[24]

3.5 This may lead to welfare losses. For example, the OECD has identified that reduced competition can reduce the need to innovate in order to stay ahead of competitors. Further, differences in the effective tax rate facing multinational enterprises able to exploit mismatches and other firms may also result in a sub-optimal allocation of capital if it means the multinational enterprise crowds out potentially more productive investment by other firms.[25]

3.6 A related issue is that global resource allocation may be distorted by the availability of hybrid mismatch opportunities. International investment decisions may be made based on whether a mismatch is available rather than fundamental economics.

3.7 From a global perspective, hybrid mismatch arrangements typically lead to a reduction of the overall tax paid by the parties involved as a whole. The use of these arrangements has caused a significant drop in worldwide corporate tax revenue, although precisely estimating this loss is a difficult task. Perhaps the best estimate comes from the OECD, which has put the reduction in worldwide corporate tax revenue due to mismatches and preferential tax regimes at between 1.3 and 3 percent (between US$33 and US$79 billion in 2014).[26]

3.8 The drop in tax revenues from the use of hybrid mismatch arrangements has real distributional consequences. It means governments must impose higher taxes elsewhere in their economies in order to deliver the desired level of public services. This reduces worldwide welfare. The costs associated with imposing tax generally increase more than proportionately as tax rates increase. Imposing higher taxes elsewhere in order to make up lost tax revenue due to the use of hybrids is likely to be less efficient than imposing more moderate taxes across all economic actors.

3.9 Hybrid mismatch opportunities may also contribute to financial instability through increases in tax-leveraged borrowing, or as a result of businesses entering into investments which are uneconomic before tax, but marginally viable after tax as a result of taking advantage of such an opportunity.

3.10 Allowing the use of hybrids is also inequitable as it results in uneven tax burdens across different businesses. This is an issue in itself, but may also weaken taxpayer morale. The perception of unfairness that comes from the reported low corporate taxes paid by taxpayers who can take advantage of hybrid mismatch opportunities (and/or employ other BEPS strategies) is an issue. This perception of unfairness undermines public confidence in the tax system and therefore the willingness of taxpayers to voluntarily comply with their own tax obligations.

3.11 The OECD’s recommendations represent an agreement by participating countries that hybrid mismatch arrangements should be neutralised and also how they should be neutralised. While tolerating mismatches in some cases may have benefits to one country (at the expense of another), that behaviour carries a range of negative consequences. It harms competition, reduces worldwide revenue collection in an arbitrary and unintended way, results in inefficient investment decisions and damages the public’s perception of the “fairness” of the tax system.

Uptake in other countries

3.13 The Government of the United Kingdom has already consulted on adopting the OECD’s approach to addressing hybrid mismatches,[31] and has now introduced legislation to Parliament (see Schedule 10 of the Finance (No.2) Bill). The intention is that the legislation will have effect from 1 January 2017.[32]

3.14 The Council of the European Union adopted the Anti Tax Avoidance Directive in June 2016, which sets out six anti-avoidance measures that all EU member states must implement into their own tax systems by 31 December 2018. One of the six anti-avoidance measures is to implement rules to counteract intra-EU hybrid mismatch arrangements.[33] The European Council, with reference to the OECD recommendations, has also asked the European Commission to propose rules by October 2016 that apply to hybrid mismatch arrangements involving non-EU countries.

3.15 Some countries have introduced domestic rules to combat the effects of hybrid mismatch arrangements prior to the OECD BEPS project or without explicitly following the OECD recommendations. These countries include Denmark, France, Spain, Mexico and Austria, while Germany and Hungary have proposed to introduce rules in the future.

3.16 New Zealand has a general anti-avoidance rule (GAAR) that can, in some instances, neutralise the tax effects of a hybrid mismatch arrangement (such as the arrangement in Alesco). However, the target of the GAAR is arrangements that avoid New Zealand tax. The arrangement must also do so in a manner that is outside Parliament’s contemplation; a classic indicator being that the arrangement gains the advantage in an artificial or contrived way.[34] Although the use of a hybrid mismatch arrangement reduces the overall tax paid by the parties to the arrangement, it is often difficult to determine which country involved has lost tax revenue. Further, the use of a hybrid is not necessarily artificial or contrived in and of itself. Accordingly, the GAAR does not provide a comprehensive solution to counter the use of hybrid mismatch arrangements. This is also seen in Australia where the “black letter” tax treatment of the hybrid instruments in the Mills case referred to above was not reversed by the equivalent Australian anti-avoidance provision, on the basis that the tax benefit was incidental to the commercial benefit.

3.17 The New Zealand tax revenue loss caused by the use of hybrids is difficult to estimate because the full extent of hybrid mismatch arrangements involving New Zealand is unknown. However, the tax revenue at stake is significant in the cases that the Government is aware of, which shows a clear advantage to counteracting hybrid mismatch arrangements. For example, the amount at issue under all funding arrangements comparable to the Alesco arrangement referred to in Chapter 2 was approximately $300 million (across multiple years). In relation to hybrid entities, deductions claimed in New Zealand that are attributable to some prominent hybrid entity structures result in approximately $80 million less tax revenue for New Zealand per year.

3.18 However, it is possible that a particular hybrid mismatch will be to New Zealand’s benefit (and to another country’s detriment). If an arrangement results in the elimination of residence-country taxation, the return to the investor will increase while New Zealand will continue to earn the same level of tax revenue. The investor will have incentives to increase their investment in New Zealand.

3.19 On the other hand, a hybrid mismatch may also result in the elimination of tax in New Zealand. If the availability of the hybrid means the investor invests using the hybrid instead of equity – or crowds out investment by another investor who would have invested through equity – the result is a clear welfare loss for New Zealand. Tax revenues would fall and actual investment in New Zealand would remain unchanged.

3.20 Importantly, it is generally impossible to tell which of these situations will arise: whether a hybrid mismatch will result in the elimination of residence-country tax or the elimination of New Zealand tax. More broadly, even if it could be shown that New Zealand would be the beneficiary of a hybrid mismatch, it is an open question whether allowing the mismatch to be exploited would be appropriate. The double non-taxation benefits that arise from exploiting hybrid mismatches are (except in very unusual cases) not intended by either country. New Zealand would obviously welcome an intentional foreign policy that makes it more attractive for non-residents to invest here. Allowing the exploitation of unintended mismatches in tax rules to achieve non-taxation of income is another matter.

3.21 The use of hybrid mismatches can result in losses to New Zealand in other ways as well. For example, hybrids have been an important feature of tax avoidance arrangements in recent history. A simple example using a hybrid financial instrument is illustrated in Figure 3.1 below. 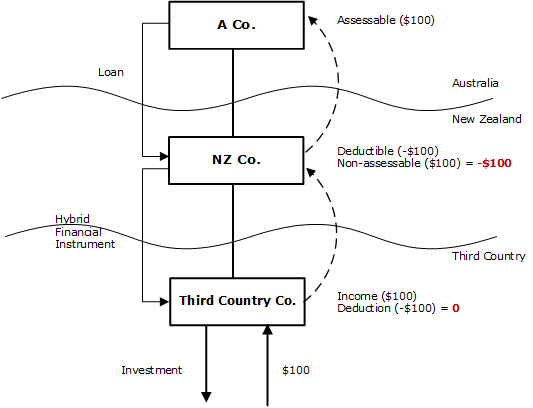 3.25 However, instead of adopting the OECD recommendations in their entirety, New Zealand also has the option of introducing rules that specifically target the known hybrid mismatch arrangements affecting New Zealand, such as ALPs and MCNs. This approach may reduce complexity, as fewer rules would be needed (at least initially) in comparison to a full adoption of the OECD recommendations. However, it would be difficult to precisely identify the rules that would be needed and the rules that would not. Also, it is likely that taxpayers would respond to targeted rules by exploiting other tax planning opportunities left open by this approach. The Government is therefore of the view that adopting the comprehensive set of OECD recommendations at the onset is a proactive, and likely cleaner option. Adopting the recommendations in full also has the advantage of being consistent with the intended approach of Australia and the United Kingdom.

3.26 The Government’s desire is that any new rules addressing hybrid mismatch arrangements should be effective from a policy perspective, but be as simple as possible to comply with and administer. In considering the need for simplicity, the Government will take into account the fact that in most cases, the impact of hybrid mismatch rules will be to encourage businesses to use simpler structures which do not require the rules to be applied.

3.27 Taking the discussed factors and arguments into account, the best approach for New Zealand is likely to be to co-operate with other countries to eliminate hybrid mismatches by adopting the OECD recommendations. As noted above, when companies exploit hybrid mismatches, the result is that no tax is paid anywhere on a portion of income. This leads to an inefficient allocation of investment as cross-border investments where mismatches are available are subsidised relative to other investments. Eliminating this misallocation would increase worldwide efficiency, leading to higher worldwide incomes – which New Zealand will likely share in.

23 For example, the mismatch may allow the multinational to reduce its prices in the short term with a view to gaining a dominate market share (and then increase prices to increase profits).

25 Action 11 Final Report at p170. The OECD also notes, however, that if tax planning multinational enterprises are more productive than the firms they crowd out, the overall effect on efficiency is unclear.

26 Action 11 Final Report at p168. The method adopted by the OECD means that losses due to hybrids and preferential regimes cannot be disentangled.

27 The terms of reference for this project can be found at http://taxboard.gov.au/consultation/implementation-of-anti-hybrid-rules/

28 Board of Taxation, Implementation of the OECD anti-hybrid rules (2015). http://taxboard.gov.au/files/2015/08/BoT-Anti-hybrid-Discussion-Paper.pdf

29 This report was subsequently released to the public on 3 May 2016. http://taxboard.gov.au/files/2016/05/Implementation-of-the-OECD-hybrid-mismatch-rules.pdf