… exploits a difference in the tax treatment of an entity or instrument under the laws of two or more tax countries to produce a mismatch in tax outcomes where the mismatch has the effect of lowering the aggregate tax burden of the parties to the arrangement.

2.2 Thus, a taxpayer with activities in more than one country may have opportunities to escape taxation through the use of hybrid mismatch arrangements.

2.3 In the vast majority of cases, the tax outcome comes from a mismatch of domestic laws. However, double tax agreements can be used to enhance a tax benefit (for example, via the elimination or reduction of withholding taxes at source). The use of hybrid mismatch arrangements puts the collective tax base of countries at risk, although it is often difficult to determine which individual country has lost tax revenue under an arrangement.

2.4 Action 2 of the OECD Action Plan on Base Erosion and Profit Shifting (BEPS) calls for domestic rules targeting mismatches that rely on a hybrid element to produce the following three tax advantage outcomes:[7]

2.5 The mismatches targeted are those arising in the context of payments as opposed to, for example, a mismatch arising from rules that allow a taxpayer “deemed” interest deductions for equity capital.

2.6 In broad terms, hybrid mismatch arrangements can be divided into the following categories based on the particular hybrid technique that produces the tax outcome:

2.7 Hybrid entities and instruments can be embedded in a wider arrangement or structure to produce indirect D/NI outcomes.

2.8 A simple arrangement involving the use of a hybrid financial instrument is set out below. 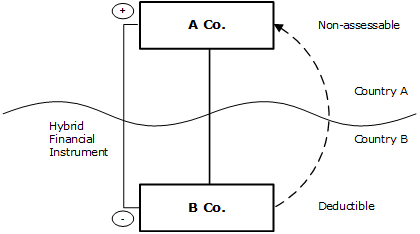 2.10 A number of New Zealand taxpayers have had recent involvement in tax avoidance litigation with the Commissioner of Inland Revenue regarding their use of hybrid financial instruments in funding arrangements with their offshore parents.

2.12 Apart from taxpayers formally bound by the Alesco ruling, a number of New Zealand taxpayers have, in recent times, entered into arrangements under which they have issued mandatory convertible notes (MCNs) to their offshore parents. Commonly, interest is accrued over the term of the arrangement, and at maturity, the issuer’s interest obligation is satisfied by issuing shares. As New Zealand treats the MCN as debt, the arrangement gives rise to deductible interest to the New Zealand issuer,[11] but the issue of shares to satisfy the New Zealand issuer’s interest obligation does not result in income to the offshore parent (that is, D/NI).

2.13 The Commissioner has challenged a number of the arrangements using MCNs as tax avoidance arrangements. Under recent Australian domestic rule changes, a D/NI outcome can potentially now be achieved using an MCN with cash interest payments. Previously, Australia’s non-portfolio foreign dividend exemption would not have applied had cash interest (rather than the issue of shares) been paid under the MCN, because an MCN is not legal form equity.[12] Now, such payments would likely be exempt in Australia;[13] the amendments ensure that Australia’s non-portfolio foreign dividend exemption applies to returns on instruments that are legal form debt but that Australia characterises as equity, as a matter of substance, under its debt-equity rules.[14]

2.15 This type of instrument is considered in Example 2.1 of the Final Report, which concludes that it gives rise to a hybrid mismatch.

2.16 A simplified arrangement involving a hybrid transfer is set out in Figure 2.2. 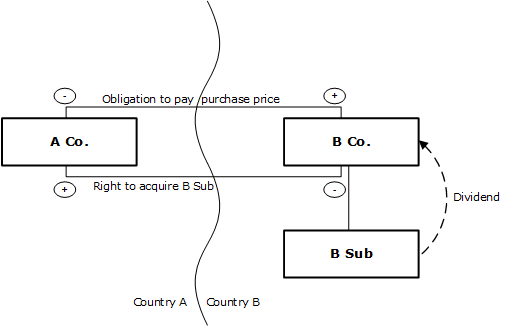 2.18 A Co (resident in Country A) owns B Sub (resident in Country B). A Co sells its B Sub shares to B Co under an arrangement that A Co will reacquire those shares at a future date for an agreed price reflecting an interest charge reduced by any dividends B Co receives on the B Sub shares. Between sale and repurchase, B Sub pays dividends on the shares to B Co. In Country A, A Co is treated as receiving these dividends and paying them to B Co as a deductible financing cost. In Country B, B Co is treated as receiving the dividends, which are tax exempt. The tax effect is D/NI.

Disregarded payments made by a hybrid payer

2.19 A simplified arrangement involving the use of a hybrid entity to achieve a D/NI outcome is set out in Figure 2.3.

Figure 2.3: Disregarded payments made by a hybrid entity[17] 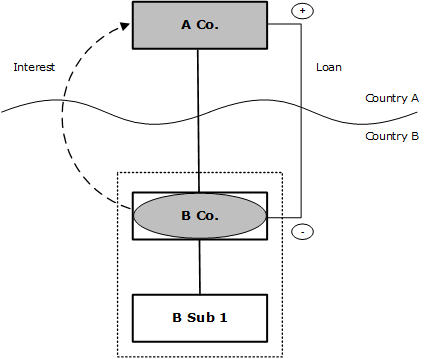 2.22 The creation of a permanent establishment in the payer country can be used to achieve a similar D/NI outcome. For example, a subsidiary company resident in an overseas jurisdiction could borrow from its parent company resident in the same jurisdiction. If the subsidiary allocates the loan to a New Zealand branch, the interest paid on the loan would be treated as deductible in New Zealand (but subject to New Zealand non-resident withholding tax). However, a tax consolidation of the subsidiary with its parent would mean that the interest payment is disregarded in the overseas jurisdiction.

Deductible payments made by a hybrid payer

2.23 A simplified arrangement using a hybrid entity to achieve a DD outcome is set out in Figure 2.4. 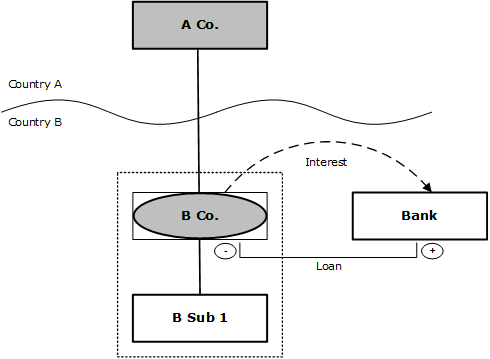 2.24 Under the arrangement, A Co (resident in Country A) owns all the shares of B Co (resident in Country B). B Co borrows from the bank and pays interest on the loan, deriving no other income. As Country A treats B Co as transparent, A Co is treated as the borrower by Country A. However, as Country B treats B Co as opaque, B Co is treated as the borrower by Country B. The result is a deduction for the interest expenditure in Country A and B (that is, a DD outcome). If B Co is consolidated for tax purposes with its operating subsidiary B Sub 1, B Co can surrender its tax deduction to B Sub 1, allowing two deductions for the same interest expense to be offset against separate income arising in Country A and Country B.

2.25 Australian limited partnerships (treated as transparent in New Zealand, but opaque in Australia) are used to achieve an outbound DD result in essentially the manner described in the example above.[20]

2.27 A simplified arrangement using a reverse hybrid is set out in Figure 2.5. A reverse hybrid is a hybrid entity that is treated as opaque by its foreign investor, but transparent in the country of its establishment (in the reverse of the examples described above). 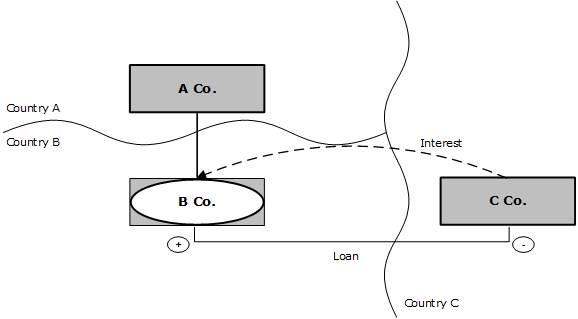 2.28 A Co (resident in Country A, the investor country) owns all the shares in B Co, (the reverse hybrid established in Country B, the establishment country). Country B treats B Co as transparent, but Country A treats B Co as opaque. C Co (resident in Country C, the payer country) borrows money from B Co and makes interest payments under the loan. The outcome is D/NI if the interest paid by C Co is deductible in the payer country (Country C), but not included as income under the domestic rules of either the investor or establishment country (Country A or B), because each country treats the income as having been derived by a resident of the other country, and Country B does not treat the income as sourced in Country B.

2.29 Controlled foreign company (CFC) rules in the investor country that tax the income of residents earned through CFCs on an accrual basis would eliminate such mismatches. However, New Zealand’s CFC rules contain an active income exemption as well as a safe harbour, under which passive income is not subject to accrual taxation if it is less than 5 percent of total income. 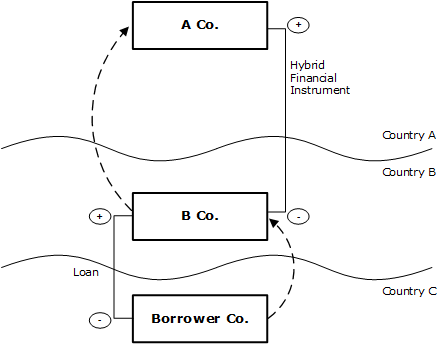 2.31 A Co lends money to B Co, a wholly owned subsidiary of A Co, using a hybrid financial instrument, so that payments under the instrument are exempt in Country A, but deductible in Country B. Neither Country A nor Country B has hybrid mismatch rules. Borrower Co then borrows from B Co. Interest payable under the loan is deductible in Country C (Borrower Co’s country of residence) and taxable income in Country B. The result is an indirect D/NI outcome between Countries A and C (Country B’s tax revenue is unaffected as the income and deductions of B Co are offset).

2.32 It is difficult for tax investigators to detect imported hybrid mismatches, as detection requires a broad understanding of a taxpayer group’s international financing structure. This information is often not publicly available, and can be difficult to obtain from the New Zealand taxpayer. However, if a country were to introduce hybrid mismatch rules without a rule against imported hybrid mismatches that could allow some taxpayers to seek to exploit that gap. This would be against the intended outcome of the rules which is that the tax advantages of hybrid mismatches are neutralised, leading taxpayers to, in most cases, adopt more straightforward cross-border financing instruments and structures.

11 And no New Zealand NRWT obligation.

14 The Tax and Superannuation Laws Amendment (2014 Measures No. 4) Act 2014 received Royal assent on 16 October 2014. The relevant provisions apply the day after Royal assent: section 2 and Part 4 of Schedule 2.

18 The treaty implications relate to whether, and to what extent, Countries A and B are limited by the relevant treaty in taxing the income of A Co. Under the OECD Model, an amount arising in Country B is paid to a resident of Country A, so, prima facie, the benefits of Article 11 (Interest) would be granted.