2.1 The GST treatment of non-profit bodies (NPBs) differs from that of other entities in two areas:

2.2 The exemption for donated goods and services by an NPB is clearly legislated for and will not be affected by the proposals in this issues paper. Rather, the issues paper concentrates on the lack of specific guidance in the legislation on the output tax (the GST charged) liabilities of an NPB where goods and services that are not specifically exempt are supplied by an NPB. The question of whether GST is payable in these cases is dependent on whether the goods and services in question are supplied in the course or furtherance of the NPB’s “taxable activity”, that is any regular activity that involves making supplies for consideration.

2.3 The GST treatment of NPBs’ outputs has been uncertain since the introduction of GST, so it has likely been assumed by many that the liabilities would be the same as for any GST-registered person apart from the exemption for donated goods and services. In other words, some may have assumed in line with the general expectation under the GST system, that GST is payable on any supply for which input tax deductions have been claimed. This was because it may have been thought that, once an entity registers, all its activities (other than its expressly exempt activities) form part of the entity’s taxable activity.

What is a “taxable activity”?

2.5 Figures 1 and 2 illustrate the GST position for an NPB under the earlier alternative interpretation (“old interpretation”) and the “new interpretation’ of “taxable activity”. The green box on the left hand column shows the GST payable by the NPB and the red boxes on the right show the GST that can be claimed back by the NPB. The non-coloured boxes show where GST is either not payable or not able to be claimed back.

2.6 Note that the only difference between figures 1 and 2 is that the GST payable is reduced because some supplies that were previously considered part of an NPB’s taxable activity are now non-taxable supplies. While they are not exempt supplies under the GST Act, they are still excluded from the “taxable activity” definition as they do not have a sufficient connection with an activity from which money (or other consideration) is derived. Importantly, while described differently, the new interpretation does not change the level of input tax deductions that can be claimed by NPBs.

Example 1: Asset not part of the taxable activity

A charity for the homeless owns two buildings – one a headquarters dedicated to fundraising and one an emergency accommodation facility which charges a fee based on the facility’s costs for its services. The funds raised assist towards researching issues about homelessness and finding local and national solutions.

The charity has claimed input tax deductions for capital, maintenance and overhead costs relating to both buildings. Following Inland Revenue’s recent interpretation, it could be argued that the charity would not be required to pay output tax on a sale of the fundraising headquarters because the sale would not have been made in the course or furtherance of the taxable activity of providing emergency accommodation. This situation arises because:

This example is illustrated in figures 1 and 2. 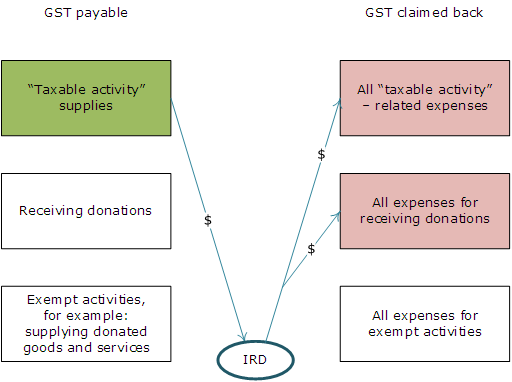 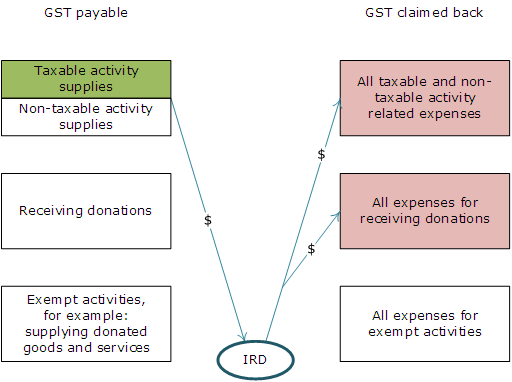