2.1 The Government recognises that confidentiality is an important aspect of taxpayers’ trust in the tax system. Therefore, when considering information sharing between Inland Revenue and other agencies, strict processes are involved and the benefits to society must be clear.

2.4 The Government is proposing that the existing AISA between Inland Revenue and the New Zealand Police, the Serious Crimes Information Sharing Agreement,[1] is extended to include two additional agencies, the Serious Fraud Office and the New Zealand Customs Service. These agencies have an interest in the efficient and effective reduction of serious crime. The extension to the agreement will assist them in identifying, investigating and prosecuting fraud, corruption, and cross-border crime.

2.5 Extending the existing agreement, rather than using other legislative mechanisms to share information, is considered the best option to enable these agencies to work together and provide an all-of-government response to serious crime. The proposed extension to the AISA would enable:

The ‘test for sharing’ framework

2.8 The second test is the ‘reasonable grounds and relevance’ test, where the agency identifying the possible offence must also consider whether there are reasonable grounds for suspecting that a serious crime has been committed, is being committed, or will be committed; and that the information is relevant in the prevention, detection or investigation of, or there is evidence of, the serious crime. In the case of requests for information, when determining whether the information Inland Revenue holds is relevant, it may be necessary for Inland Revenue to seek further details from the requesting agency. In addition, sufficient information will need to have been provided to ensure that a match is made to the correct individual or entity for which information is sought.

2.9 The final test ensures the appropriate use of Inland Revenue’s resources. The test is essentially one of balancing the benefits of releasing information and the costs of preparing that information for release. Information would be provided only when:

Figure 1: Overview of the current agreement and the proposed extension 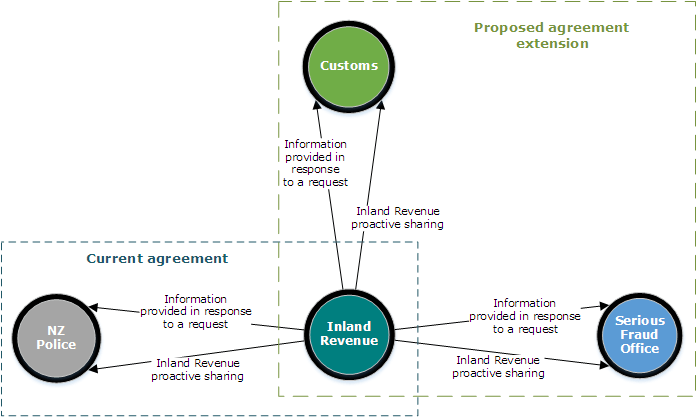 Information to be shared

2.14 Information to be shared should be broadly defined to include information about organisations, entities, and individuals that may be involved in, or otherwise connected to, a serious crime or individuals with whom they have a relationship.

2.15 For the purposes of illustrating the type of information to be shared, the information may relate to offending such as investor fraud, money laundering, drug manufacturing or distribution.

2.16 Examples of the information that Inland Revenue may share with the other agencies include:

This may include their IRD number, entity information, the taxes for which they are registered, income history, tax payment history (including any compliance issues), types of income, expenses, asset and liability information, and actions taken or planned to be taken in relation to the specified person. The information provided may relate to a victim of a serious offence rather than the perpetrator of the offence in order to identify a person who may have had a motive to harm the victim.

This may include information necessary to understand beneficial ownership, or the nature of the structures the specified person is involved with.

This may include judgements about compliance behaviour and judgements on possible approaches by the specified person to compliance with tax and other legal obligations. Information shared would include documents Inland Revenue may have that would support another agency’s enforcement action.

2.17 The Government takes the protection of personal information seriously. The proposed AISA would include controls and processes to minimise any risk of a privacy or secrecy breach occurring.

2.18 The sharing of information would only occur for the purpose set out in the AISA, which is for identification, investigation and prosecution of serious crime.

2.19 Memoranda of understanding agreed by the agencies involved would need to be in place before any information sharing could occur, and would provide:

2.20 Information would be available only to authorised staff in each agency to ensure that information is treated appropriately under the proposed AISA. Staff who knowingly disclose information outside what is legally permitted would face potential criminal liability for breaching taxpayer secrecy.[2]

2.21 In the event of a privacy breach, despite the safeguards, measures will be in place to ensure that any affected individuals are identified as quickly as possible. The necessary steps taken to minimise and mitigate any risk to those individuals are that:

2.22 The following examples illustrate scenarios where the ability to share information between Inland Revenue and other agencies would be of value.

An investigation, where there was suspicion of tax offending, provided evidence that suggested a businessman had set up complex business and tax structures, with appropriate cut-offs through a professional trustee company, to orchestrate tax evasion. This tax evasion was addressed as part of Inland Revenue’s enforcement activities. However, the investigation also disclosed probable and significant fraud against a trustee. Because of Inland Revenue’s secrecy rule, Inland Revenue was unable to advise the Serious Fraud Office about the suspected fraudulent activity. This meant the businessman could not be stopped and the suspected fraudulent transactions could not be raised with the Serious Fraud Office.

With the proposed AISA extension, Inland Revenue would be able to advise the Serious Fraud Office of the suspected fraud, and the case could be evaluated and investigated to avoid further impact to possible victims and public confidence.

During a tax audit investigation it becomes obvious that significant funds flowing through a taxpayer’s bank account, on which tax has been paid, are not related to the core business activities. Further investigation reveals the potential for this taxpayer to be involved in smuggling drugs into New Zealand.

Example scenario 3: Investigation into a controlled drug importation across the border

In a New Zealand Customs Service investigation of a controlled drug importation, the offender claimed to have a legitimate business. However, Customs was unable to identify any business accounts at all, only a cash account. Since Customs could not prove the origin of the cash deposits, they were unable to confirm the cash came from the proceeds of the controlled drug sales, and the charges available to be laid against the individual were limited.

In this scenario, the proposed AISA extension would allow Inland Revenue to provide Customs with data that would have opened a number of new lines of enquiry, as well as enabling a better picture of the proceeds from the controlled drug sales. The offender would likely have received a sentence more suited to the offending.

[1] The AISA is available at https://www.ird.govt.nz/aboutir/agreements/agreement-police/.