Chapter 4 - Implementation and entry into effect

4.1 The MLI will be signed by a number of participating jurisdictions in June 2017. At the time of signature, a list of reservations, notifications and choices will be provided to the OECD Depository.[4] Jurisdictions will also be able to sign up to the MLI at a later date.

4.2 After signing, the MLI will need to go through New Zealand’s domestic treaty-making process. This will be the same process as for DTAs and amending protocols. Recent amendments to section BH 1 of the Income Tax Act 2007 – the empowering provision for New Zealand’s DTAs – make it clear that multilateral agreements can be implemented under this section.

4.3 This treaty-making process will involve the tabling of the MLI and a national interest analysis (NIA) in the House of Representatives for treaty examination. Following consideration by Select Committee, an Order in Council will be submitted to Cabinet for approval and once this is in force, New Zealand will formally ratify the MLI by submitting an instrument of ratification to the OECD Depository. At the time of ratification, New Zealand must confirm its list of reservations, notifications and choices.

4.4 After this point in time, jurisdictions are able to add new DTAs as Covered Tax Agreements and withdraw their reservations (or enter more limited reservations), but are unable to enter new reservations. The effect of this is that, following ratification, New Zealand (and other) jurisdictions can expand, but not narrow, the application of the MLI to their DTA network.

4.5 The MLI will enter into force generally (in its own right) and for the states that have ratified it, three to four months after the fifth jurisdiction has ratified the MLI.

4.6 For each jurisdiction ratifying the MLI after it has entered into force, it will enter into force three to four months after that jurisdiction deposits its instrument of ratification.

Entry into effect for a specific Covered Tax Agreement

4.8 The MLI will enter into effect to modify each bilateral DTA, on a phased-in basis, once both parties to the DTA have signed and ratified the MLI.

4.9 For withholding tax, it will apply where the event giving rise to the tax occurs on or after 1 January of the next calendar year beginning on or after the latest date on which the Convention enters into force for each of the parties to the Covered Tax Agreement.

4.10 For income tax, it will apply to taxable periods (in New Zealand’s case, income years) beginning on or after a 6 month period from the latest date on which the Convention enters into force for each of the parties to the Covered Tax Agreement.

4.11 The example below illustrates the theoretical timeline for how the entry into force and effect could work for a DTA between New Zealand and Jurisdiction B. 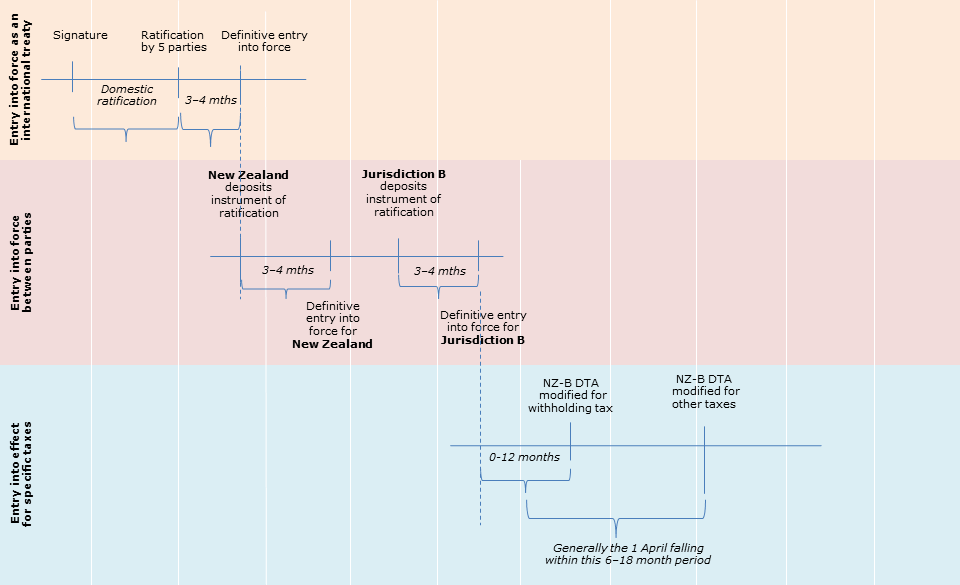 4.12 While the precise dates on which New Zealand’s DTAs will begin to be modified are unknown, it is likely that the earliest modifications will occur in 2019.

4.13 Part VI (Arbitration) will generally apply to cases presented to Competent Authorities (CAs) on or after the latest date on which the MLI enters into force for each of the parties to the Covered Tax Agreement. By mutual agreement, jurisdictions can agree to submit a case to arbitration that was presented to the CAs prior to this time.

Notification of entry into effect for specific Covered Tax Agreements

4.14 As each jurisdiction submits its instrument of ratification to the OECD Depository, New Zealand will be notified. When the MLI comes into force for each of New Zealand’s DTAs the Government will announce the fact.[5] This is to advise taxpayers that the DTA has been modified.

4.15 Some domestic law changes may be needed to facilitate the modifications to New Zealand’s DTAs by the MLI.

4.16 For example, officials anticipate there may need to be some amendments to the dispute procedures in Part 4A of the Tax Administration Act 1994 to enable cases to be submitted to arbitration without prejudicing taxpayer rights under the domestic law.

4.17 Officials are interested to receive submissions on these and other aspects of domestic law that may need to be similarly amended.

4 The notification process is very important as the operation of many of the articles of the MLI turn on notification. To facilitate the notification exercise, the OECD is hosting a meeting in February 2017 to enable jurisdictions to ensure their bilateral notifications match.