3.1 This chapter sets out a proposed rule to prevent multinationals avoiding a PE in New Zealand. The rule broadly applies where a related entity (such as a wholly-owned subsidiary) carries out sales activities for the non-resident in New Zealand under an arrangement which is contrary to the purpose of the PE provisions.

3.2 The proposed rule is an anti-avoidance measure. It is intended to apply where the non-resident’s economic activities in New Zealand should result in a PE here, but the non-resident has been able to structure its legal arrangements to avoid one arising. The proposed rule is not trying to widen the accepted international definition of a PE in substance. In particular, the rule will not apply where no material economic activities (other than the sale of the goods or services into New Zealand) are carried on in New Zealand by or on behalf of the non-resident.

3.3 The proposed rule is very similar to the ones found in the UK DPT and the Australian multinational anti-avoidance law (MAAL).

3.4 A long established and widely used concept in tax systems around the world is the concept of permanent establishment or “PE”. Historically, taxing rights were based around a taxpayer’s PE in a jurisdiction. Where no PE exists, then there are generally no rights to tax business profits. The advent of the internet has made cross-border commercial traffic much easier, with no need for a company to have a PE in a country.

3.6 The current definition of a PE varies from DTA to DTA, however a non-resident will generally have a PE in New Zealand if (amongst other things) either:

3.10 This kind of structure thus allows a multinational to avoid having a PE in New Zealand (arguably) by splitting its sales activities between wholly owned group members (or other associated entities). While these group members are treated as separate entities for legal purposes, they are part of the same economic entity in substance. Accordingly the avoidance of a PE in these circumstances is contrary to the economic substance of the arrangement.

3.12 An example of this kind of PE avoidance structure is set out in the appendix (structure 3), together with a more detailed discussion of the current legal issues.

3.13 Inland Revenue is also aware of cases where the multinational argues that the related party only carries out general support activities (such as marketing), but in reality they substantially negotiate the sales agreements. In such cases the related party should constitute a dependant agent PE of the non-resident. However these cases are very resource intensive to prosecute in practice, especially obtaining the requisite evidence to demonstrate the true extent of the related party’s activities.

3.15 This widened definition should be effective in addressing some of the PE avoidance we see in New Zealand. However an issue with the widened definition is that it will only be included in a DTA if both parties so elect. Several of New Zealand’s trading partners are not expected to elect to include the widened PE definition, including some countries from which significant investment into New Zealand is made. Therefore, the Government expects that the OECD’s PE amendments will not be sufficient to address the issue of PE avoidance in New Zealand.

3.16 The UK and Australia have adopted specific rules to address PE avoidance in their DPT and MAAL. The Australian and UK rules are very similar, and broadly apply where:

3.17 Where the rules apply, the non-resident’s supplies are deemed to be made through a local PE. The usual transfer pricing and profit attribution principles then apply to determine the amount of profits from those supplies which can be taxed in the local jurisdiction. Accordingly not all the profits from the non-resident’s local sales will be taxed when a PE is deemed to exist under the UK and Australian rules. The UK and Australian rules override their DTAs.

The proposed solution for New Zealand

3.18 The Government proposes adopting a similar rule to that in the UK DPT and the Australian MAAL. The rule would widen the circumstances in which the activities in New Zealand of a related party would give rise to a PE for the non-resident under any applicable DTA.

Application of the rule

3.19 The proposal would only apply to a non-resident that is part of a multinational group with more than EUR €750m consolidated global turnover. The EUR €750m threshold has been chosen to align application of the proposed rule with the OECD’s threshold for requiring large multinationals to file country-by-country reports. The threshold also broadly matches the AU$1b threshold adopted by Australia for its PE avoidance rule (the MAAL).

3.20 The proposed rule would apply to income years beginning on or after the date that the relevant legislation is enacted.

3.21 Under the proposed rule, a non-resident will be deemed to have a PE in New Zealand for the purposes of any applicable DTA if there is an arrangement under which:

3.22 It is intended that only activities designed to bring about a particular sale should potentially result in a deemed PE. Therefore general auxiliary or preparatory activities (such as advertising and marketing) would not be sufficient to trigger a possible PE under the rule. This is consistent with the definition of a PE in most DTAs, which prevent the carrying out of auxiliary and preparatory activities from giving rise to a PE. It also reflects the intended scope of the rule, which is to determine whether a particular sale is made through a PE by imputing the related party’s activities in relation to that sale to the non-resident.

3.23 Any sales-related activity carried on by an unrelated independent agent will also generally not give rise to a PE under the proposed rule (to reflect the current definition of a PE in New Zealand’s DTAs).

3.24 For the proposed rule to apply, the arrangement under which the non-resident makes its supplies into New Zealand must defeat the purpose of the PE provisions in the applicable DTA. This test is focussed on whether the non-resident’s supplies are made through a PE in substance. In determining whether this test is met, the following factors will be relevant:

3.25 The legislation enacting the proposed rule (if it is adopted) may specify some of these features.

Therefore while the arrangement also has a significant commercial purpose of selling goods into New Zealand, the way the arrangement was implemented defeats the purpose of the PE provisions by preventing a PE from arising at law when one exists in substance.

3.27 The proposed rule is also intended to apply where an independent third party is interposed between the non-resident and the New Zealand customer as part of the arrangement. Accordingly the rule will also apply where: 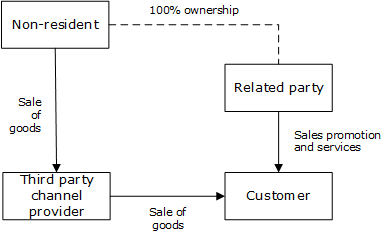 (Click on the image for a full-size version | SVG source)

3.31 The rule also will not apply to a standard distributor type arrangement, under which the third party purchases goods from the non-resident and independently sells them to customers in New Zealand. This is because, in such a case, the third party would be carrying out all the particular sales activities (rather than the related party). This would be the case even if the related entity undertook general marketing and advertising activities in New Zealand in respect of the products (or after sale support).

3.32 If the rule applies, then a PE is deemed to exist and the non-resident’s supplies in New Zealand are treated as being made through that PE.

3.34 The PE will be treated as existing for the purpose of any DTA. So the non-resident will not be able to argue the PE article of an applicable DTA prevents New Zealand from taxing the supplies where the proposed rule applies. This matches the position under the Australian MAAL and the UK DPT.

3.35 However the other provisions of a DTA in relation to the taxation of profits of a PE will still apply. Therefore if the rule applies, New Zealand will only tax the portion of the sales income that is attributable to the deemed PE. This will be determined by the application of the normal profit attribution principles.

3.36 We expect that the application of these principles will result in a fairly significant amount of the sales income being attributable to the deemed PE in most cases. We also expect a material amount of net taxable profit to remain in the PE after the deduction of related expenses. In this regard, we note that New Zealand, like many countries, has not adopted the OECD’s revised methodology for attributing profits to a PE.[7] The OECD’s revised methodology is also not currently reflected in many DTAs. New Zealand instead applies the earlier version of the OECD’s methodology.

3.37 If the proposed rule applies, then the PE will be treated as existing for the purpose of all the provisions in the DTA. So for example where the rule applies, New Zealand would be able to impose withholding tax on any royalty paid by the non-resident in respect of the supplies made through the PE (for example, in the New Zealand/Australia context, under article 12(5) of the NZ Australian DTA).

3.38 The current 100% penalty for taking an abusive tax position (under section 141D of the Tax Administration Act 1994) will also apply for the purposes of the proposed PE avoidance rule.

3.39 We note that the ultimate objective of the proposed rule is to discourage non-residents from entering into PE avoidance structures in the first place. This reflects the current policy emphasis on voluntary compliance within the Tax Acts.

3.40 The proposed rule should not conflict with New Zealand’s DTAs in the vast majority of cases.

3.42 The proposed rule is an anti-avoidance provision. It will only apply to an arrangement which defeats the purpose of the DTA’s PE provisions. The Commentary states that, as a general rule, there will be no conflict between such anti-avoidance provisions and the provisions of a DTA. It also confirms that jurisdictions are not obliged to grant the benefits of a DTA if the DTA has been abused (noting that this should not be lightly assumed).

3.43 The OECD’s 2015 report on BEPS Action 6 (Preventing the Granting of Treaty Benefits in Inappropriate Circumstances”), which will update the Commentary in light of the OECD’s BEPS project, has also confirmed this position.

3.44 The proposed rule is also consistent with the OECD’s recommended measures to prevent the artificial avoidance of PE status, set out in its report on Action 7. In particular, the OECD recommends a measure to widen the circumstances in which the sales activities of a related party can give rise to a PE for the non-resident. This new measure will be incorporated into a DTA where both parties agree pursuant to the Multilateral Instrument, which will amend the DTAs of participating countries to implement a number of the OECD’s DTA related BEPS measures.

3.45 We propose providing that our PE avoidance rule would apply notwithstanding anything in a DTA. This is to simplify the application of the rule. Otherwise it would be necessary to show that the application of the rule was consistent with a DTA in each particular case. This would be a time-consuming and resource intensive exercise. The Government also considers that taxpayers should not be able to rely on DTAs to protect their tax avoidance arrangements. This is the same position as the UK and Australia have taken in respect of their PE avoidance rules.

6 The customer must be unrelated to the supplier for Australia’s MAAL to apply.

7 One reason for this is that the OECD’s latest approach, referred to as the Authorised OECD Approach or AOA, allows a deduction to be taken by the PE for a notional royalty paid to the head office, but does not allow withholding tax to be charged on that notional royalty (unlike a real royalty).