2.1 “Feasibility expenditure” is not a defined term in tax legislation, nor is it a term of art.

2.4 The original interpretation statement allowed a relatively wide scope for “preliminary” expenditure to be immediately deductible where there was no definitive commitment to proceeding with a project. The revised interpretation statement has moved away from that formulation, and interprets the test in the Trustpower decision as providing that expenditure may be deductible where it is of a type incurred on a recurrent basis as a normal incident of the taxpayer’s business, and is so preliminary as not to be directed towards materially advancing a specific project (or capital asset or enduring benefit). That is in contrast with expenditure that is aimed at making tangible progress on a capital project, to which the capital limitation would apply.[5]

2.5 The Trustpower decision and the revised interpretation statement allow less expenditure to be immediately deductible for tax purposes than previously. This is because material advancement or tangible progress is likely to occur earlier than the prior interpretation of “definitive commitment”.

2.6 Depending on whether the project is implemented or abandoned, the expenditure may also not receive depreciation deductions over time. Non-deductibility of capitalised costs will be appropriate provided the expenditure created (or was intended to create) an asset that was not expected to decline in value.

2.7 But where taxpayers would have received depreciation deductions had the project gone ahead (because the asset was expected to decline in value), but did not because the project was abandoned before it met the definition of depreciable property, this expenditure is referred to as “black hole” expenditure.

2.9 This area of law is relatively complicated, and the Government believes that compliance and administration costs could be reduced by simplifying it. The proposals discussed here address the black hole problem and aim to simplify the law by following accounting treatment where a taxpayer has “feasibility expenditure”.

2.11 Capital expenditure on assets that are not expected to decline in value (for example, land) is not black hole expenditure, despite the fact that it is not deductible immediately or over time. This is because the taxpayer does not expect to experience an economic loss when it purchases an asset that does not decline in value.

2.12 While assets that are not expected to decline in value sometimes do, it would only be appropriate to provide deductions for this expenditure if we taxed gains in asset values if they appreciated. Further, the tax system is economically neutral when it denies deductions for unexpected capital losses, provided that it also leaves untaxed unexpected capital gains, as New Zealand’s tax system does.

2.13 For a project that potentially involves black hole expenditure, the economic result is that the expected pre-tax rate of return of an investment that may result in some black hole expenditure must be higher than the expected pre-tax rate of return for a project that does not include such expenditure. Another way it can reduce economic efficiency is that businesses may be incentivised to complete projects that do not make economic sense, to avoid black hole treatment for sunk capital expenditure (as after completion, a depreciable asset will have been created). In either situation, the tax system has introduced an investment distortion that lowers economic efficiency. 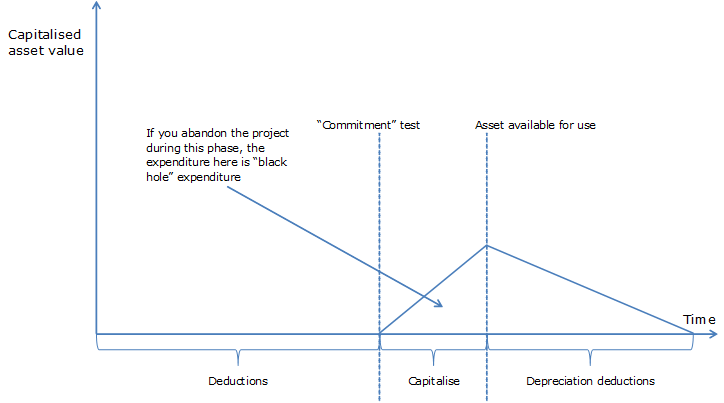 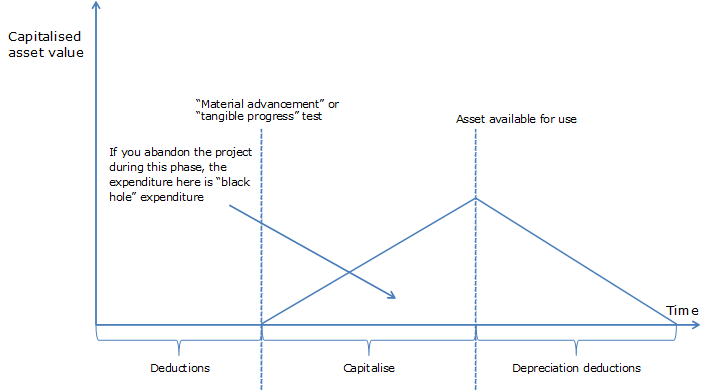 3 The case itself was about resource consent costs, which the Commissioner of Inland Revenue maintained were not immediately deductible. The Supreme Court agreed with that interpretation, but made comments on other feasibility expenditure that are inconsistent with Inland Revenue’s previous position.